Tropical Cyclone Hudhud brought torrential rains, and powerful winds, as it made landfall at typhoon strength near the city of Visakhapatnam in the Indian state of Andhra Pradesh on Sunday, October 12 (local time). Prior to the cyclone’s arrival, disaster preparedness measures were implemented, including the issuing of early warnings by the Indian Meteorological Agency (IMD), the deployment of National Disaster Response Force (NDRF) teams, the pre-positioning of rations at shelters, and mass evacuations for people in the cyclone’s path, according to a ReliefWeb report on advance actions by the Government of India.

Despite significant disaster risk reduction efforts, the sheer strength and size of Hudhud left a trail of destruction, including casualties, which are still being assessed. The city of Visakhapatnam bore the brunt of the cyclone, sustaining damages to the airport, buildings, roads, and telecommunications. The International Federation of the Red Cross and Red Crescent Societies (IFRC) has released a situation bulletin regarding how state disaster management authorities of Andhra Pradesh and Odisha took the lead in early warning, evacuations, and deployment of state and national disaster response force teams.

In Andhra Pradesh, detailed damage assessments are being conducted by the state government. Indian Prime Minister Narendra Modi visited Visakhapatnam on Tuesday. He inspected the extent of the damage to the airport, reviewed the situation with state authorities, and promised funding for recovery and for the families of those who lost their lives in to Hudhud, the Times of India reported.

According to the latest bulletin from the IMD, on Tuesday, October 14, Hudhud had significantly weakened and is now a deep depression, causing heavy rainfall to a few areas over the states of Bihar, eastern Uttar Pradesh, eastern Madhya Pradesh and Jharkhand.

For more information on Tropical Cyclone Hudhud: • Visit the India Meteorological Agency for the latest bulletins, • Look at sitautional reports from the Ministry of Home Affairs, and • View a situational overview from the IFRC. 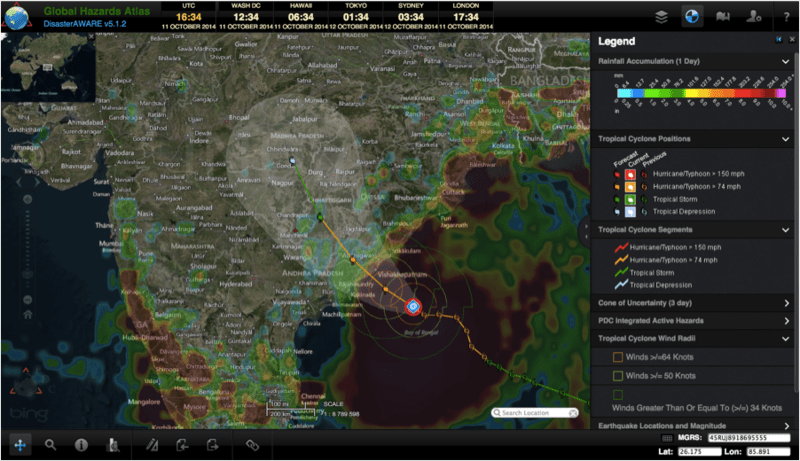