In Bay of Bengal, part of the Northern Indian Ocean, Tropical Cyclone (TC) Mahasen made landfall after tracking past eastern India towards Bangladesh and Myanmar. The cyclone made landfall in the delta area northwest of Chittagong, Bangladesh. Along with impacts inland as the storm dissipates, it continues to delivered heavy rain, wind, and storm surge to coastal residents and ocean-goers in the Bay.

Over the next 24 hours, it is predicted that the storm will continue to lose strength and dissipate. However, high numbers of people in the region are vulnerable to extreme flooding due to dense urban areas that exist within low-lying coastal areas.

Pacific Disaster Center (PDC) has been actively monitoring the development and movements of TC Mahasen, providing daily reports for the public on the Weather Wall. Also, the Global Hazards Atlas provides direct access to updates on the storm’s location and intensity. Users can view forecasts on its movements and information about critical infrastructure, population, and other at risk resources.

In addition to publicly available resources, PDC continues to work with the international humanitarian assistance community to provide critical information and support to disaster management professionals involved with preparation and relief efforts. Since TC Mahasen’s early detection last week, PDC has been producing briefings and distributing daily situational awareness products for various agencies such as United Nations Office for the Coordination of Humanitarian Affairs (OCHA), United States (U.S.) Pentagon, and US Pacific Command (PACOM), as well as for the government of Bangladesh.

As the storm moves further inland, PDC will continue to monitor the situation closely and will work with international partners to provide support to their operations. 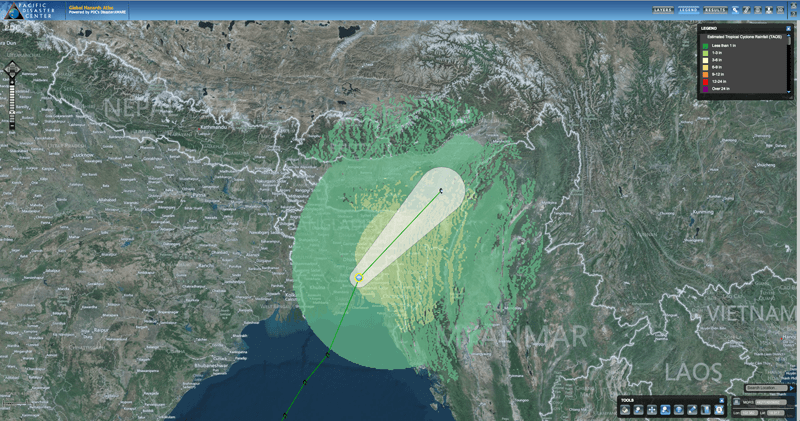